Miss Thandi: the diva with a mission 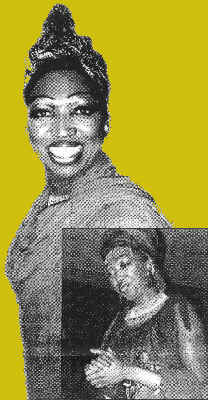 What does a polished drag artist do when she is not performing in a stage show? Miss Thandi - alias Vuyo Raymond Matinyana, born in Port Alfred - is one drag performer who does not sit around all day doing her nails.
Matinyana, currently based in Amsterdam, founded the Afro Vibes Foundation for cultural exchange and education - a project which, in its 18 month of existence, has raised enough funds to sponsor the tertiary education of three disadvantaged youths form the Port Alfred area.
He visits South Africa about twice a year, usually for the festival and to spend Christmas with his mother, Lillian, who raised him as a single parent.
Matinyana hails from a family of sangomas and his Miss Thandi outfits contain elements of the Xhosa tradition healer's garments. He believes there is a healing effect on the audience if they interactively partake in the performance by singing and dancing with Miss Thandi.
"Xhosa music is traditionally used to relieve stress. This therapeutic approach also applies to my stage performances. When people sing together, their hearts beat as one," says Matinyana.
Miss Thandi is an unconventional cultural ambassador who has introduced many cabaret audiences in Europe and the USA to traditional Xhosa songs. She also interprets songs from Nigeria, Senegal and other parts of the world and even sings Sarie Marais.
Matinyana ended up overseas when he was accepted for an American art education programme during his last year at the Fuba School of Arts in Johannesburg. After a year touring the USA and Europe with the programme, he went to Amsterdam, where he joined a group of African and Dutch musicians and presented beginners courses in Xhosa and Zulu. Miss Thandi was born when Matinyana wanted to do something more faithful to his South African roots than his imitations of Diana Ross and Shirley Bassey. Since then, Miss Thandi has been making a name for herself from the Eastern Cape to New York.