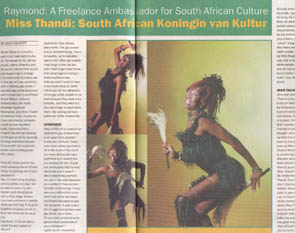 South Africa is a country with a rich and varied culture, renowned for its vibrant music, ethnic diversity and an exotic cuisine that is only just beginning to emerge internationally. lt is also one of the few African countries with a thriving gay scene. I recently spent the weekend with Amsterdam's unofficial South African Cultural Ambassador, the multi-talented Raymond Matinyana, aka Miss Thandi of Lellebel fame. A consummate entertainer, philanthropist and an excellent cook, Raymond/Miss Thandi (the Miriam Makeba of the gay world) is currently thrilling audiences across Europe with his exuberant, exotic and exciting group Afro Vibes.

First off, thank you for the most amazing South African meal. Is cooking one of your passions?
Yes, it's one of my hobbies and hopefully one day I will be able to have my own kitchen and dining place with a little stage where, I can cook and once in awhile show up and sing. It all goes together because music is food and food can be musical.

Raymond, is South Africa really the gay capitol of Africa?
We have better rights than other African countries and a constitution that supports it. The problem is the people have not changed. I mean it's there, but the gay prides will only happen in the cities, you won't have a Roze Maandag in a small little town like you do in Holland.

How was it for you growing up?
I grew up in a township where there was no visible gay life. I mean I didn't know I could fall in love with a man. It was there inside me but I didn't know that you could touch a man, walk with him, kiss him and actually sleep with him (laughs)!

Did you have boyfriends in South Africa?
Yes, I have had relationships with black South Africans but most of my boyfriends have always been white. The gay scene was in Johannesburg. I lived in Soweto, so to socialize openly with other gay people I had to go to the city but then 1 had to get back home. One advantage to having a white boyfriend was that you didn't have to take a taxi back home at 2am! I think part of the attraction of the gay white people to us was because they were comfortable, and they were out. You had things to learn from them. My coming out was within the white community.

Was it difficult to conduct an interracial gay relationship in an apartheid society?
It was very difficult. There were times when you had to sit in the back of the car if you were driving with your boyfriend so it looked like you worked for him. It was not necessarily that he was ashamed and it wasn't about degrading yourself, you sat in the back because you wanted to have a conformable relationship. It was also very difficult for us to come out within the black community because it was not accepted. It was a double struggle being black and gay at the same time.

Do you have predominantly good or bad memories of your childhood?
I grew up on a township, that's not fun. I grew up in an apartheid system, that's also not fun. I wish I was more conscious about my being an African when I was growing up. I was born in a small town where the white man was king, he was the boss. Almost every black person in the township had to go to town and serve a white man and that was normal. I grew up like any other child in a township but I think I could have had a better relationship with my mother and my family if I had been more conscious of the hardships they endured when they left our homes. Apartheid brainwashed our people so much that our parents did not even want to share what they were going through at the time so we thought everything was normal. We were not naive, it was just the situation at the time.
I never had a wish of being different to who I was then. The more you grow up the more you learn about yourself and the situation. Eventuality there were the uprisings and you became conscious of where you should be and where you were not at. I think every child that grew up in my time was in some way involved in polities.

Are you still politically involved?
How can one not he? Well for me the Afro Vibes Foundation is my way of contributing and fulfilling the happiness I did not have as a child in South Africa. We help young people with no hope and try and fulfill their dreams with education. It takes two people to make a child but it takes a whole village to raise one. The foundation is there to inspire other people. For us the Afro Vibes foundation is voluntary work. South Africa has loads of problems. I'm here and things are available here and people are giving, so why be selfish?

Raymond, when you were growing up did you ever imagine your life being any- where other than South Africa?
Not really, no. Actually I was quite happy in South Africa until Up With People came to my school (laughs)! They were interviewing people who wanted to travel and perform around the world. I was one of the people they chose. It was not my dream, it was an opportunity. I'm happy that I did Up With People because I learned a lot and it was a wonderful experience.

What was the most important thing you learned in Up With People?
Actually what I gained was my youth. I got to be young. All of my life I have always been an adult. I grew up in a society where you had the responsibility as a child to be the mother or father to your sisters, there is no "youth" thing.
Also there was a majority of white people in the cast of Up With People, so for me it was nice to learn about white people in a very equal way as opposed to a boss/worker or "child of the maid" way. We had common goals.

How and when did Miss Thandi come into being?
In South Africa there used to be Hollywood Look Alike type of events in the gay community. When I was still a student, there was a flyer that I picked up and it was looking for participants and I thought, why not? It was not my first time in a dress but it was my first performance. It was not Miss Thandi, I was Dionne Warwiek. I did a really convincing Dionne Warwick actually! I won, so that's where it started.

How do your family relate to Miss Thandi?
My whole family loves Miss Thandi. They know that she's the breadwinner. My mother always makes a point to see my shows when I am in South Africa. My whole community knows about Miss Thandi. There are lots of other drag artists in South Africa but I am probably the only black one that has gone this far.

How difficult has it been for you to carve out a career in the Amsterdam drag scene?
Well, I was very naive. When I came here I didn't know that there was a place like Havana. Prior to my visit to the States I had to fundraise for my tuition with Up With People, so I did a benefit concert for myself and I introduced Miss Thandi. From there people were interested outside of the gay scene. In around 1995 I did a Miss Havana competition as Miss Thandi and for some reason I won. I don't know why, I don't think I was the best. Just different. Then of course I was introduced to the scene. It was all nice for awhile but I'm not a club person, I'm not a go-go person. I come from another culture and I felt I was losing myself. So I started on the African scene, founding the group Afro Vibes (same name as the foundation) for Miss Thandi and somehow the two worlds came together and found some balance. We play everything from the biggest festivals to the smallest cafes in town. That's my baby at the moment. I'm working on my own CD right now. The medley on the Lellebel CD was actually a demo for my Afro Vibes CD.

Is the medley popular in your live shows?
Yes, but I don't use it as a medley, I use it as separate songs. Of course The Click Song is the popular song, and Pata Pata is very well known so people can sing along, and then of course Sarie Marais is an Afrikaans song. I always try to find a way of representing South Africans as a nation and also trying to find things that are familiar to the audience. Of course I also have my own songs that I wrote and arranged.

How do you feel about artists like Helmut Lotti who sold hundreds of thousands of copies of his Out Of Africa CD?
For me, I am happy because it means there is nothing impossible. The culture is something that can be shared. Helmut Lotti is a white man who has not even lived in South Africa. If you look in South Africa, there are few white people who sing or speak our language, so for this man to be able to carry our music like that is not bad, it's a compliment. That said, I hope our music will be respected not only because it is sung by white people but in its own right.

What is the connection you have to Amsterdam?
Well, Amsterdam was the first place I came to after leaving South Africa. Coming to Holland in '91, it was a time when the anti-apartheid movement was really active. There were so many South African cultural and political activities that I somehow felt like I hadn't really left. I fell in love with Holland because it felt like I was still home. Also for me it was a coming out. Coming out in that I could just walk freely as the person that I am. It's complicated at times. Holland colonized us but was also one of the countries that helped to free us. A lot is buried and people don't really want confrontation. I am glad to be here but I know its not home.

Finally, do you see yourself as an unofficial Ambassador of South African culture?
Who doesn't get paid for it (laughs)! It is amazing how you realize the value of your culture when you are away from home. Yes, you might say that I am seen as a cultural ambassador. One of the Afro Vibes Foundation's goals is to organize cultural activities in Holland and South Africa. Basically I am just an artist trying to survive. I share with others what I know and who I am. I will always be South African no matter where I am, I cannot forget where I come from.