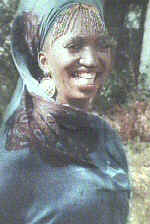 ... But best of the lot was local royalty in the form of Miss Thandi, a flamboyant drag act by Vuyo Matinyana from Port Alfred, who has lived in Amsterdam for the past six years. Whether doing Sarie Marais or the click song, Qongqothwane, she whipped audiences into a frenzy of singing, clapping and on-stage participation that at times humiliated males for their chauvinism while women whooped in delight. Yet under the surface was the healing power of a sangoma and a deep respect for Xhosa culture. ... (Sunday Times)

I don't know of another performance at the festival where the audience has spontaneously broken into three-part harmony. Perhaps it was just this audience but I'm told something special always happens when Miss Thandi is around. ... (Cue Magazine)

The cast of the Afro Vibes' Miss Thadi Show flew out of Amsterdam to Johannesburg on the 1st of July to perform at the Grahamstown National Arts Festival.
The show opened on the 5th of July at the Grand Mousseux Room, a venue at the Settler's Inn. The press attended (see reviews), and amongst the audience were representatives from the National Arts Council of South Africa, Funiwe and Albert. Hans Glaubitz, cultural attachï¿½ of the Dutch Embassy in Pretoria and the NAC CEO D Nteta were amongst the guests who attended during the run of the show. Family and friends were also present amongst the wonderful audiences and supporters of the Miss Thandi Show. The shows ran quite smoothly.
The cast also attended two receptions, one by the Dutch Embassy which was hosted for the NDT1 (Nederlands Dans Theater) and another by the NAC of South Africa.
Some of the Miss Thandi Shows were filmed by a TV-crew from Amsterdam for a documentary that will be shown in the Netherlands. They also covered bits and pieces of the festival and the landscape of South Africa.

The Miss Thandi Show moved from Grahamstown to Port Alfred and performed at the Civic Centre, this show was opened by the mayor of Port Alfred Mr Hani. We gave a local kwaito group of young guys called "the Supremes" an opportunity to upstage Miss Thandi.

The next morning the Miss Thandi Show Cast members gave workshops to the talented people of Port Alfred, who have no resources. The cast found itself discussing issues around carriers and gender in the performing arts, most of the girls were impressed by the female cast members who play the bass and keyboard and also the ups and downs of Raymond the story from Port Alfred to Amsterdam. Most of these young people were very motivated and one of the things they stressed was the need of someone in the community who could guide and help with information and a network so they can further developing performing skills. We had a lot to share.
In the afternoon Raymond met the Rotarians and discussed few ideas that will uplift the young and the old people of Port Alfred including the Scholarship Project that Afro Vibes has launched. Later on the workshops continued with the steelband project that was established this year by the Rotarians for the disadvantaged youth. We hope that we have planted good seeds and left a good impression to these young people and other citizens of Port Alfred and Grahamstown and in South Africa.