The Miss Thandi Show was the musical cabaret-show by Raymond Matinyana. The show was full of South African energy with a strong interaction with the audience. Miss Thandi performed with the Afro Vibes Band and turned every party or meeting into a unforgettable feast.

I don't know of another performance at the festival where the audience has spontaneously broken into three-part harmony. Perhaps it was just this audience but I'm told something special always happens when Miss Thandi is around. ...
(Grahamstown National Arts Festival South Africa, Cue Magazine) 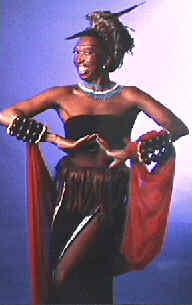 From the country of Clicksongs.
The little girl from the countryside, 'shy' and sensitive,
but at the same time elusive and mysterious.
Feel the pulse of African rhythms.
Learn African dances, and sing along.
Experience the many worlds of Miss Thandi,
the entertainer from the country of ancient cultures and very new future.
The country of Mandela.
The Rainbow Nation.

... But best of the lot was local royalty in the form of Miss Thandi ...
... Yet under the surface was the healing power of a sangoma ...
(Grahamstown National Arts Festival, South Africa, Sunday Times)