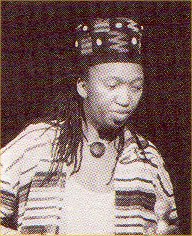 Little did I know when I had the pleasure of interviewing Raymond Matinyana for a feature article in Gay News, just a few month later I would be writing his obituary.

A much loved and colourful figure in Amsterdam's gay and cultural scene, Raymond passed away on Wednesday 14th November 2001 in hospital Amsterdam. He suffered from acute liver failure which was caused by hepatitis B. He was 32.
Known to many as Miss Thandi, Raymond was a survivor and his life was a remarkable success story. Growing up poor, black and gay in the township of a violently apartheid South Africa, Raymond somehow managed to nurture and achieve his dream of becoming an international entertainer.
Kind of heart and generous in spirit, it became one of his passions to give something back to the community from which he came. Together with his lover of four and a half years, Jan, he set up the foundation Afro Vibes with the goal of sponsoring needy children in South Africa. Raymond was devoted to his community, his ideals transcended barriers which he expressed through his music and remarkable performances.
A favourite at the Amsterdam drag club Lellebel where Miss Thandi was a regular performer, Raymond was hard at work on his first commercial CD. Fittingly, the last night of his life was spent on stage singing with his beloved Afro Vibes Band.
As dramatic as he was in life, his death was a double tragedy. At the end of November the plane carrying his body to South Africa for his scheduled burial December 1st in his home town of Port Alfred, crashed in Nigeria. The body was lost in the wreckage.

IN HIS OWN WORDS

In any interview, much more is said than can ever be printed. In honour of Raymond I have gone back and found some comments cut from the final text of his feature article. It is Raymond in his own words, his last interview:
"I enjoyed my childhood because I grew up in a community. I never had a wish of being different to who I was then. The more you grow up the more you learn about yourself and the situation [apartheid]. Eventually there were the uprisings and then you learn more about where you should be and where you were not at. I think every child that grew up in my time was in some way involved in politics."
"For me the foundation [Afro Vibes] is my way of contributing, and fulfilling the happiness I did not have as a child in South Africa. So in a way I'm living it through other young people. I mean today I have a piano in the house and I can't even play and I'm thinking [laughs]: 'Probably if I was white I might have gone to a better school that had a piano!' I'm a singer and I could have just stayed home and played all the time. Here it is my partner who plays the piano so beautifully. He didn't even have to go to school to learn piano!"
"What I'm trying to say is that we help young people with no hope and try and fulfill their dreams with education. The foundation is to inspire other people. If there is one child that makes it, you know they will spread the word. Not to us, to the people. There might be someone who says: 'Oh wow, I wish I could do the same.' It is just to inspire them, you can't help it." 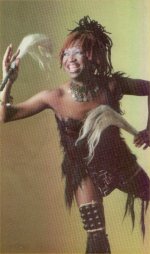 "South Africa has such a big problem education-wise. There are a lot of youth people who finish high school and are just sitting at home with no idea of where to go. There is no scholarships, it's not like in Holland where when you finish high school there is money there that you can apply for. I'm here and things are available here and people are giving so why be selfish? I mean I will always be South African no matter where I am at, I cannot forget where I come from."
"I didn't come to Holland to make the world perfect. I came here for myself to give and share with the Dutch people as much as I can whilst I can."

Many people have lost a friend, the music world has lost a voice, South Africa has lost a brilliant point of light and Amsterdam has lost the finest ambassador for South African culture it could ever hope to have. May he rest in peace.
The Matinyana Fund will continue in memory of Raymond. Anyone interested in learning more about the foundation or in donating to a Matinyana Fund scholarship fund in honour of Raymond can find more information at www.matinyanafund.org.za.